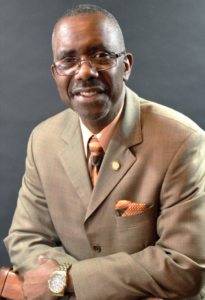 Elder Willie J. Boyd, Sr. was born March 17, 1961, in Covington, Tennessee.  Aware at a very young age that God had been calling him into the ministry, Elder Boyd surrendered to the call in 1982 while serving in the Church of God in Christ Germany Jurisdiction.  He was ordained as an Elder in 1989 by Bishop Carlos L. Moody.

Elder Boyd served over twenty years in the military and retired in 2004 as a First Sergeant from the United States Army.   One of the highlights of his military career is when he was selected to serve as a member of the Communication Management Support Team to assist the United States Secret Service in aid of the 1996 Presidential candidate Bob Dole and Jack Kemp.  He is currently employed as an Instructional System Specialist (Training Developer) with the 442nd Signal Battalion, Cyber Center of Excellence, Fort Gordon, Georgia.

Elder Boyd has worked untiringly in the church, giving himself wholly to the work of God for the edifying of the Saints.  He has served in many positions, which include:  Pastor of the Augsburg COGIC, Germany, Chairman of the Augusta District Auxiliary in Ministry, President of Augusta District Young People Willing Worker (YPWW), facilitator for Northern Georgia 2nd Ecclesiastical Jurisdiction Fine Arts, and the Charles Harrison Mason Jurisdictional Institute. Elder Boyd received the Governor of Maryland Volunteer Award for Prison Ministry.

Elder Boyd and his family moved to the Augusta area in 1999 where they visited and immediately joined the Friendly COGIC.  He has served as president of the Youth Department, Chairman of the Elders Council, Sunday and Bible Band Teacher, and trained and participated in the church street ministry.  In 2014, after serving faithfully alongside the Pastor, Elder Boyd was appointed as the Assistant Pastor.  December 2016, he was elected as the new pastor and in January 2017 was installed as the Pastor of Friendly COGIC.

Elder Boyd’s educational background consist of an Associate Degree in Theology from Charles Harrison Mason Bible College 1996, a Master Degree in Education Leadership from Troy University in 2003, Master Degree in Business Administration from the University of Phoenix in 2012, and a Master Degree in Human Resource Management from Webster University in 2014.  After completing his MBA Elder Boyd began seeking and praying to God about starting a business.  God gave him the scripture “For ye have the poor with you always” (Mark 14:7), which inspired him in May 2013 to establish his business “Heaven on Earth Property Management”, that provides affordable housing to low income families.

Elder Boyd has always had a great love for the church and the work of the Lord and believes that every church should be a Samaritan hospital where people can come to be healed, delivered and set free.  He is married to Evangelist Missionary Patricia A. Boyd and is the father of one son; Willie, and one daughter, Ursula. They have three grandsons and two granddaughters.

Pastor Willie Boyd’s favorite scripture is Ephesians 3:20 “Now unto him that is able to do exceeding, abundantly above all that we ask or think, according to the power that worketh in us.”